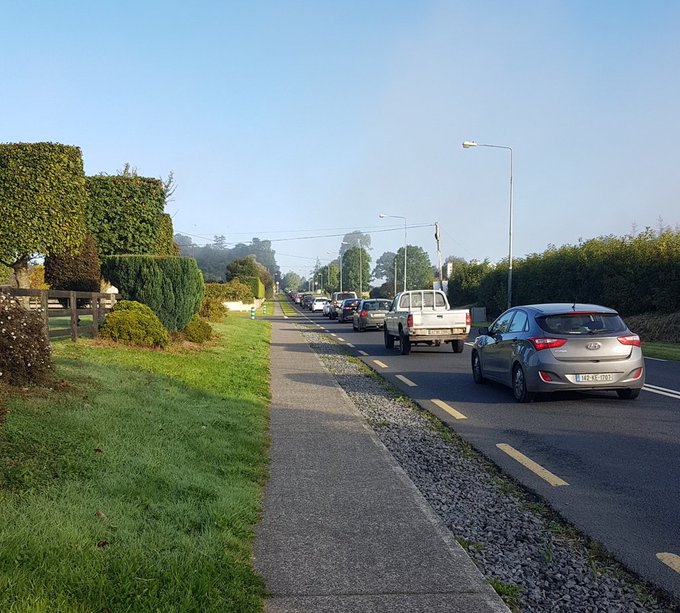 DELAYS of up to three to four hours and 15 kilometre tailbacks stretching into Kilkenny county have plagued the first morning of the National Ploughing Championship.

The worst affect traffic routes are the two going through Kilkenny to the championship site in Fennagh, county Carlow.

Those stuck in traffic took to social media to say they were experiencing delays of three to four hours on the Yellow Route, and over two hours on the Blue Route. Journeys from Kilkenny city mid-morning were taking two hours.

Gardai traffic management at the site say the worst of the traffic has passed and they expect it to be more free-flowing from here on in.

Earlier this morning, there were massive tailbacks on the Blue Route at the M9 at Paulstown – 17 km from the site.

Gardai had to re-direct traffic off the motorway through the village as traffic was bumper to bumper on the M9. A stop-go system was put in place to get the motorway moving again.

The route with the most issues this morning was the Yellow Route, through Hugginstown, Mullinavat, Danesfort, Gowran and Goresbridge. People visiting the championship traveling on this route were faced with delays of up to four hours.

Gardai are urging those driving not to stop for any toilet breaks and not leave gaps between cars. They asked people to follow the instructions of the 400 gardai working on the routes and the stewards at the car parks.

The traffic chaos comes as organisers announced they expect record crowds at the 2019 event. 300,000 punters are expected to descend on the National Ploughing Championship over the three days, up 25% on last year.

But as big as the queues were waiting to get into the site, there was pandemonium on inside the event early this morning, people squeezing into a tent for possibly the biggest draw of the week.

Forget combines, forget tractors, forget the straight furrow and the freebies – pretty much every transition year student bussed into Carlow today squeezed into one tent phones at the ready to get a glimpse at the best in show – a certain kind of best in show

Love Island winner and Munster’s most famous rugby player Greg O’Shea, had arrived. Cue screams that could be heard in cars stuck back in Goresbridge. Greg was joined on stage by another of Ireland’s most eligible bachelors’, Marty Morrissey.