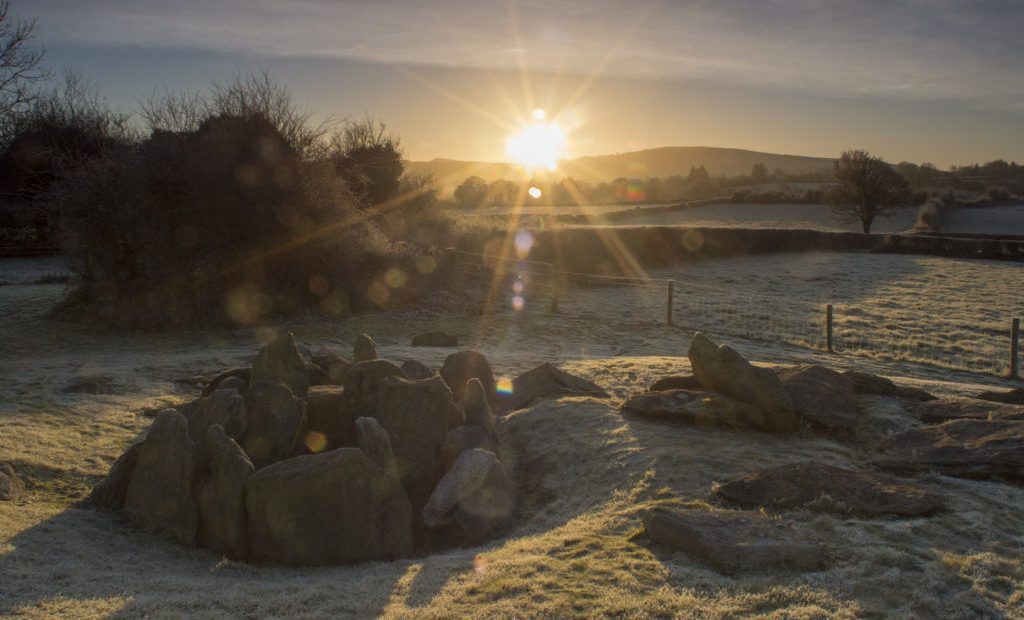 A globally unique experience that happens in Kilkenny just once a year is set to cause wonder and amazement through its celestial magic tomorrow.

Hundreds of people will gather at the millennia-old passage tomb of Caiseal in the townsland of Knockroe to see not one, but two burial passages illuminated by the sun.

Knockroe’s Passage Tomb, sat on a hill overlooking Ahenny’s Slate Quarries and staring directly at Slievenamon, is simply a one of a kind.

“Knockroe is unique in the world,” says Richard Walsh, Chairman of Caiseal, the local preservation group and a member of the Lingaun Valley Tourism Group, “nowhere else we know of has a passage that is lit up in the morning and then another lit up in the afternoon.

“Everybody who comes will be able to see the wonder of Knockroe as you get to look down into the tomb and see it being illuminated by the Sun. It’s not a tomb like Newgrange where you are inside – with Knockroe you can stand outside and see it being lit up.

Knockroe dates back to around 3,000 BC and predates Newgrange, Stonehenge and the Pyramids. It consists of two burial chambers, a southern and western, both of which are aligned to the sunrise and sunset of the winter solstice – December 21.

The magic happens when the sun enters through the roof of the chamber and penetrates up to the tall sandstone rock which disperses the light through the tomb.

Although only discovered in the 1990s, Richard says news of its wonder has travelled and now attracts worshipers.

“Since the tomb was unearthed just around 30 years ago, a group of druids come to celebrate the solstice taking in the moment and make offerings like wheat and oats.

“Depending on the weather, we have had around 300 up here for the solstice, which for the time of year is impressive,” Richard said.

People who wish to travel are advised to come early, at least 30 minutes in advance.

The tomb isn’t easy to find. For those traveling south the best route is to use the M9 motorway and take the turnoff at Knocktopher. Once off the M9 travel towards Kilmoganny on the R681.

In Kilmoganny, take the R697 towards Carrick-on-Suir, stay on this road until you come upon the junction to the Slate Quarries at Delaney’s Pub where the tomb will be signposted.

At Delaney’s take a right and follow the road for roughly 3km through the townsland of Inchnaglough after which you will come to a T-junction. Take a right and travel about 500mts where the entrance to the tomb will be on your left.

If you are travelling north, go to Carrick-on-Suir and take the R697 at the back of the town park. Travel for 8km until you reach the junction of the Slate Quarries at Delaney’s Pub, then follow the directions above.

Parking is on the road and members of Caiseal group, who organise the celebration, will be there handing out non-alcoholic hot punch and food.

SPONSORED: SKC Providers, where houses are turned into homes