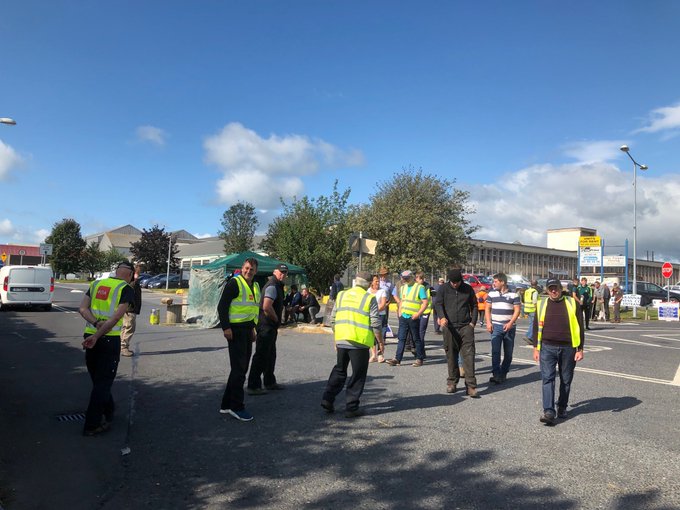 Dawn Meats has laid-off 150 temporary workers at their facility in Grannagh, South Kilkenny as a result of on-going Beef Movement Plan protests.

The protests started ten days ago with thousands of farmers picketing meat processing facilities around the country.  Protesters turned up at the Grannagh facility last Thursday.

Since then, up to 60 protesters have set up a 24-hour picket outside the south Kilkenny facility.

The protesters managed to reduce the number of animals entering the facility, effectively closing the plant. As a result, management has decided to temporarily lay-off staff.

This morning a spokesperson for Beef Plan Movement said the lay-offs are “very regrettable” and “could have been avoided.” The movement is calling for the meat processor’s organisation, Meat Industry Ireland (MII), to sit down with the farmers and enter dialogue.

The movement has called on the organisers of this weekend’s Tullamore Agricultural Show to withdraw their invitation to Agriculture Minister Michael Creed.

It is understood Minister Creed asked the Beef Plan Movement to suspend its protests and enter into talks with all stakeholders including farm organisations, beef processors, Meat Industry Ireland (MII), and the Department of Agriculture, this invite was rejected.

This afternoon, the President of the Irish Farmer’s Association, which has not supported the Beef Plan Movement, offered his sympathy to the laid-off staff. Joe Healy wants to find a solution to the current impasse.

“A lot of those staff in those plants are part-time farmers as well. No one likes to see anyone laid-off.

“I would hope that some solution could be found to this sooner rather than later.”