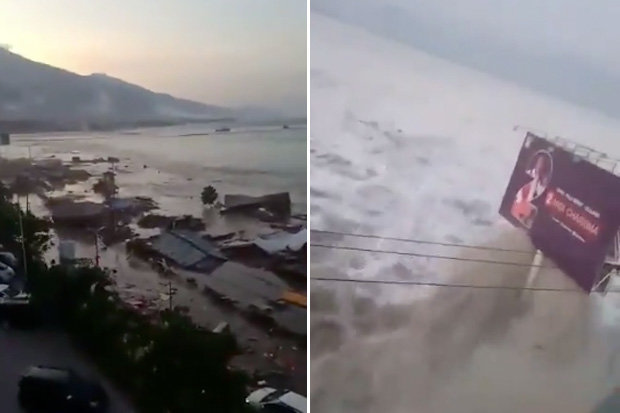 THE tsunami in Indonesia has now killed at least 373 people and injured more than 1,400 on the islands of Java and Sumatra, an official confirmed today.

“1,459 people are injured, while 128 remain missing,” Sutopo Purwo Nugroho, a spokesman for Indonesia’s disaster mitigation agency, said in a statement.

Indonesian military and rescue teams fanned out across a stretch of coastline earlier today, hoping to find survivors of a tsunami triggered by an underwater landslide from a volcano that has been erupting for months.

Authorities called for vigilance amid the spewing of ash by Anak Krakatau, a volcanic island where a crater collapse late on Saturday together with a high tide set off waves that smashed into coastal areas.

Rescuers using heavy machinery and their bare hands searched through debris, pulling out bodies in the worst-affected areas on the west coast of Java island, where and hundreds of soldiers and volunteers looked for victims along a 100 km (60 mile) stretch of shore.

About 12,000 residents had to move to higher ground, with a high-tide warning extended until St Stephen’s Day.

The vast archipelago, which sits on the Pacific “Ring of Fire”, has suffered its worst annual death toll from disasters in more than a decade.

Earthquakes flattened parts of the island of Lombok in July and August, and a double quake-and-tsunami killed more than 2,000 people on a remote part of Sulawesi island in September.

President Joko Widodo visited the affected area earlier today and praised the authorities for swift action in responding to the latest disaster.

“The speed and accuracy in the field is to be appreciated,” he said.

Saturday’s tsunami came with almost no warning and destroyed more than 700 buildings, from small shops and houses to villas and hotels. The time between the landslide and waves hitting the coast was just 24 minutes.