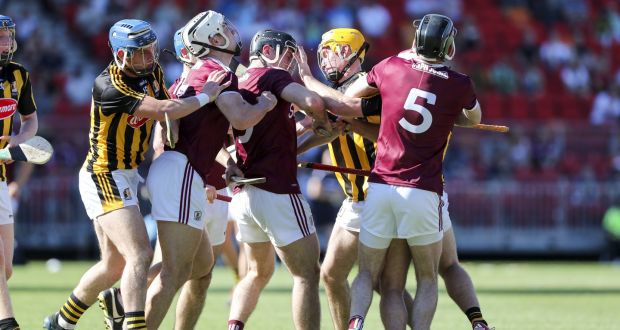 KILKENNY missed out on the first Wild Geese trophy after they were edged out by Galway in the narrowest of margins Down Under.

Galway took the spoils after they overcame the Cats following a free-taking competition after a dramatic draw in Sydney’s Spotless Stadium.

The contest between the 2017 All-Ireland champions and the 2018 National League winners finished in a high-scoring 4-23 to 3-26 tie, with both sides fielding a mixture of experienced heads and young players.

Galway had roared back to force extra time despite trailing by 14 points towards the end of the first half. The game’s decisive moment came at the death when Tribesmen substitute John Mooney hit the net, tying the game.

Galway were then more accurate from the 65m line, converting four efforts to Kilkenny’s three. Jason Cleere and Conor Martin missed for the Cats while Niall Burke converted to win the Wild Geese trophy for Galway.

An even opening 15 minutes was quickly turned on its head after former All Star Ger Aylward bagged two goals, putting Kilkenny 2-14 to 0-6 in front. Galway rallied with a goal from Niall Burkem making it a more manageable 2-15 to 1-10 deficit at the break.

Joe Canning saw red for a high tackle on Enda Morrissey after 54 minutes but goals from Cathal Mannion, Davy Glennon and Mooney were enough to take the game to the free-taking contest, where Galway kept their nerve to prevail.

GAA ROUND-UP: All the latest local results, tables and fixtures

Caught in the act: gang who cut through roof of Kilkenny business captured on CCTV