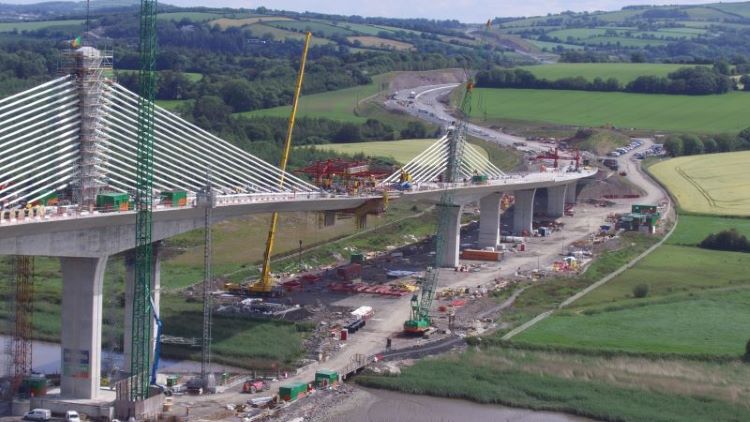 CRUMBLING concrete could delay the opening of Ireland’s longest bridge, connecting South Kilkenny to county Wexford, into next year

The €230 million,  887m Rose Fitzgerald Kennedy bridge connecting Pink Point, Glenmore in Kilkenny to Stokestown in Wexford was found to have an issue with defective concrete in one of its supporting piers.

In a Kilkenny County Council statement to the KilkennyNow.ie a spokesperson confirmed the issue with the concrete and said: “there was an issue with one of the 11 pier supports at the interface where the pier meets the underside of the bridge deck.”

The issue was detected during the summer as a part of a contractor’s works monitoring regime. Engineers believe the issues arose during the high-pressure blasting of the concrete while undergoing construction.

The remediation works to remedy the problem has already taken place and this did not stop the main construction of the bridge from progressing, however, because of the nature of the work, it did cause a delay to the bridge’s completion timeline.

Already it was announced the opening of the bridge was delayed, initially intended to be in the Spring of this year, it was postponed until at least November. This latest delay means the opening of this bridge has been pushed back again, possibly into the new year depending on the weather conditions.

The 887m Rose Fitzgerald Kennedy bridge forms the main part of the €230 million New Ross bypass, a 15km bypass stretching through South Kilkenny and into Wexford on the N25 road.

The bridge will be longest “extrados” type bridge in the world, and the longest bridge in Ireland. This type of bridge uses a combination of cable-stay and pier supports to hold its two central spurs, at 230 metres are the longest post-tensioned concrete spans in the world.

Its 887metre span makes it about twice as long as the River Suir Bridge that connects Grannagh in Kilkenny to Gracedieu in Waterford, and just 30 metres longer than the Foyle Bridge in Derry.