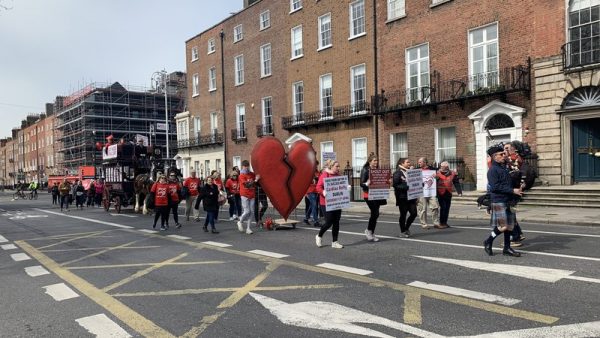 HUNDREDS of people from Kilkenny and across the South East joined forces to demand 24 hour cardiac care services for the region at a march in Dublin today.

Busloads of protesters travelled to the capital this morning to make their voices heard. The march got underway at the Garden of Remembrance at 1.30pm, before snaking its way along O’Connell Street and over to the south side of the city before converging outside Government buildings on Merrion Square.

The colourful protest featured giant broken hearts, highlighting the fact that the South East remains the only region in the country without 24/7 cardio services. Protesters held aloft placards demanding equality of services for the region.

Yesterday KilkennyNow.ie reported how many of Kilkenny’s hurling legends – including Brian Cody (pictured below), Henry Shefflin, TJ Reid and Richie Hogan – have lent their support to the campaign for 24/7 cardio services, which is being led by the Health Equality for the South East and the South East Patient Advocacy Group.

Campaigners claim lives are being lost because a 24-7 service is not available to people in the region.

A cath lab at University Hospital Waterford currently only operates from 9am to 5pm on Monday to Friday. Outside these hours people in need of emergency cardiac care must be transferred to Cork.

In January, thousands of people took to the streets in Waterford to call for increased services.