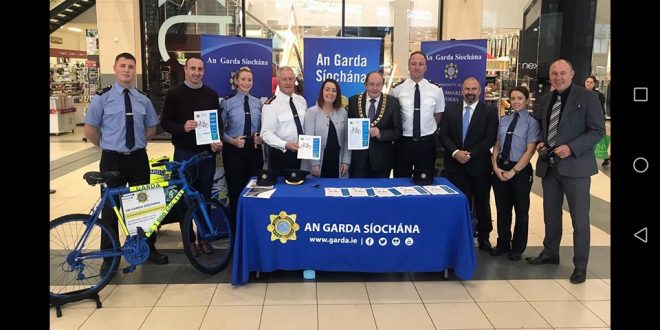 KILKENNY gardai were out in force this week putting the wheels in motion on a new initiative aimed at bicycle security.

Blue Bike Kilkenny is an awareness initiative, aimed to educate the public to secure their bicycles when left unattended. This initiative stems from the high level of bicycle theft. Bicycle theft has been on the rise for the past 3 years in succession and it is hoped that Blue Bike Kilkenny will address the issue both locally and maybe further afield.

Information leaflets were given to members of the public with handy tips such as what locks offer the best protection and what to look for when parking their bicycles in public. The leaflets can be picked up at the Blue Bike located in MacDonagh Junction Shopping centre. 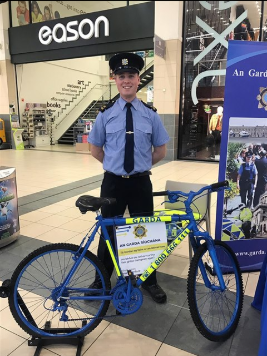 Garda Barry O’Sullivan, who spear-headed the campaign and assisted by Sergeants Peter McConnon and Mary Gilmartin as well as Garda Lisa Mullins were joined by Chief Superintendent Dominic Hayes and Superintendent Derek Hughes as well as Mayor Martin Brett at McDonagh Junction for the launch of Blue Bike Kilkenny

Speaking at the launch, Garda O’Sullivan said: “We ask for public’s assistance with this campaign and urge all members of the public to continue assisting us by contacting immediately when suspicious behavior is noted around bikes or indeed other property. The old policing saying says ‘it is better to be called and not needed than to be needed and not called’.”