Now that’s amore! It’s a 40-year-old love story that stretches from a small village in Italy to a small town in south Kilkenny. On the way it stops off in Carlow where Bruno was working in a fish and chip restaurant. And where he would meet Stasia, a local girl who caught his eye the moment they first met.

Bruno and Stasia fell in love, married, and the rest is local history.

The couple moved to Thomastown, in Kilkenny, where they opened their own chipper, the Central Take Away.

They had four children and they all worked in the Central at some stage. Their youngest daughter, Sonia, took over the restaurant which she now runs with her husband Darren Borza, whose family are from the same village, Casalattico, in Italy.

It is 40 years since Bruno and Stasia Bove opened the Central and in that time it has become an institution, known throughout south Kilkenny. On Saturday (September 12) the family are celebrating with a small get together of present and former staff.  There will be old pictures on display and many a good old story to be told.

At the heart of all the stories is a family-friendly business that has become an integral part of the community.
Always supportive of local effort, Darren and Sonia have been doing their bit to help out during the Covid crisis.

They have sponsored two charity runs to provide some support for the frontline staff at St Columba’s hospital and as a thank-you they offered free meals to all the local businesses that have stayed open.

The Central Take Away also sponsors local camogie . “We love to help our locals,”says Sonia. “We love the chats with the neighbours  and being part of the community.”

The Central Take Away is a true Irish-italian family run chipper – an Italian food outlet with a very Irish feel to it.
It’s all summed up by the Central’s speciality, the Paddy Pizza.

“It was invented by the late Paddy Hayes,” explains Sonia (pictured below with Darren). “He used to come in here and order a ham pizza, chips and a tub of curry. He could never finish it.

“Then one day he came in and ordered a pizza with curry and chips on top. We were like, ‘how could you …?’
“But Paddy just laughed. ‘Don’t diss it til you try it,’ he said. And he was right.” 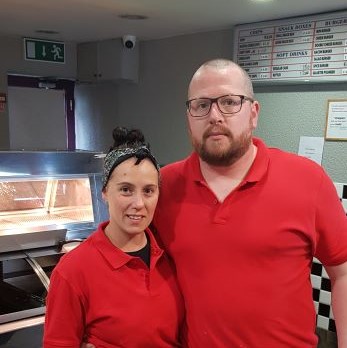 The Paddy Pizza raised some smiles and happy recollections on the sad occasion of Paddy’s funeral. “On the night of the funeral we sent down some of Paddy’s specials and said we have named  that pizza after the man himself,” says Sonia. “It’s our own unique little local thing. No other chipper can say they have that.”

Everyone in Thomastown would like to celebrate with the Borzas on Saturday but, unfortunately, Covid restrictions mean the event has to be kept small. But if you drop in you will be interested in the pictures – you may even be in some of them. And you can, of course, enjoy some great grub from Thomastown’s legendary Central Take Away.

The Central Take Away is in Market Street. It has a home delivery service for its full range of pizzas, burgers,  meal deals, snack boxes and other fast food delights. Call 056 7724362.