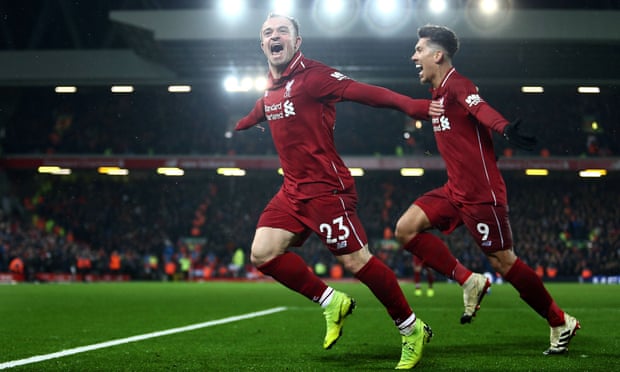 HALFWAY through the season and Liverpool are top of the table, 19 points ahead of their great rivals Manchester United.

That stark statistic must leave José Mourinho wondering if full time has been called on his underwhelming spell as United coach, particularly after seeing his side so outclassed in today’s 3-1 defeat at Anfield.

José woes could probably best be summed up by the sarcastic Kop chorus who sang ‘Don’t sack Mourinho’ as Jürgen Klopp’s team seized back control of a title race where their arch-rivals are barely even an afterthought.

For all the historic rivalry of this fixture it is the other team from along the East Lancs Road that should be uppermost in Liverpool’s thoughts now. Liverpool versus Manchester City is what matters. And United? They are just a memory.

Mourinho’s team have conceded more goals in mid-December than they did throughout the whole of last season. They are 19 points off the top and one statistic in particular stood out: 36 shots for Liverpool, their most in any league fixture for two years.

It could be years before United are title challengers again and, for a club with their ambitions, who could be surprised if the manager pays the price with his job? At any of his previous clubs it would probably have happened already.

One certainty: Liverpool will enjoy rubbernecking in United’s direction. The league leaders were fortunate in one respect, that Xherdan Shaqiri’s second-half goals both took deflections before beating David de Gea in United’s goal.

Liverpool were winning 1-0, courtesy of Sadio Mané, before a mistake from Alisson allowed Jesse Lingard to steal in for an equaliser that changed the complexion of the game.

At 1-1 there was a considerable period when Liverpool looked unusually short of ideas. But it was an adventurous move from Klopp to replace Naby Keïta with Shaqiri in the 70th minute.

The substitute scored twice within 10 minutes and Mourinho had to spend the remainder of the game listening to the crowd’s schadenfreude, with Ed Woodward, Sir Bobby Charlton and Sir Alex Ferguson watching on from the stands.

It is the worst points total for United at this stage of a season for 26 years – worse than anything that happened under David Moyes and Louis van Gaal.

After the final whistle, Klopp ran onto the pitch pumping his fists in celebration.
United 11 points off the top four and Mourinho sounding increasingly desperate. “Liverpool one, United one,” he said. “Deflections two.”

But Liverpool, holding off the champions at the top of the table, can forget United now and that, more than anything, shows the different directions in which these clubs are travelling.