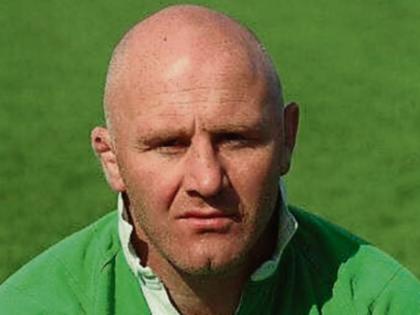 The Kilkenny man who let his feeling be known to the All-Blacks after scoring a famous try against them in the 1995 World Cup, has died.

Gary Halpin (55), the Irish front-row forward, who also represented Ireland at the 1987 World Athletics Championship in Rome in the Hammer, passed away suddenly at his home in Kilkenny.

Tributes have been pouring in for the hugely likable Kilkenny man who won 11 caps for Ireland and played for Leinster, London Irish and London Harlequins.

He is most fondly remembered for his try for Ireland against New Zealand in the 1995 Rugby World Cup in South Africa, barging three All-Blacks over the line, putting Ireland into an early lead. He famously gave the All-Blacks both barrels after crossing the whitewash. Ireland went on to lose handsomely.

Halpin hilariously told his teammate and Kilkenny resident Mick Galway in a recent interview that he sidestepped Jonah Lomu three times in that game, unfortunately Jonah Lomu had the ball in his hands each time!

It was that try, he proudly declared years later, meant he never had to put his hand in his pocket when he was travelling around South Africa and Zimbabwe a couple of years after that World Cup, such was the hatred between South Aftican and New Zealand supports and the cult status Halpin had gained.

Halpin recently returned back to his native Kilkenny taking up a role in Cistercian College, Roscrea and helped train teams at Kilkenny RFC, sharing his vast knowledge at both organisations.

Kilkenny RFC took to Facebook this morning to offer their heartfelt sympathies and said: “It’s with great sadness & surprise that we’ve learned of the sudden & untimely death of Irish Rugby legend Gary Halpin, at just 55.

“Gary played at both the 1991 & 1995 world cups, picking up 11 international caps along the way, scoring a memorable try against the All Blacks.

“He also represented Ireland at the 1987 World Athletics Championship.

“A proud Kilkenny man, he returned from Wales to live in Kilkenny in 2015, taking up the Director of Boarding role at Cistercian College Roscrea, his friendly approach & district frame saw him become a recognisable figure when walking around the City.

“Like his late Father Tom, he offered his services as coach & supporter to the club. Over the last few years he was involved as scrum / forwards coach with our 1st XV.

“He had a distinctive and assertive style of coaching, he was a gentleman & a genuine person, he will be missed by many.

Gary is survived by his wife Carol and three children.

WINE O’CLOCK: On tap and poured at your door