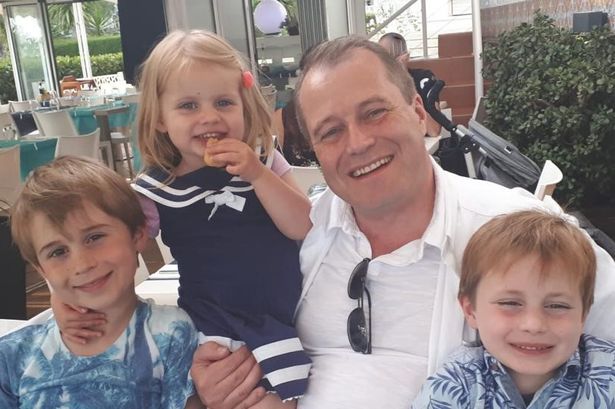 Gardai are waiting to interview the mother of the three children whose bodies were found in a house in Co Dublin on Friday evening.

Conor McGinley (9), Darragh (7) and three-year-old Carla were found dead inside their terraced home at Parson’s Court in Newcastle, a village near Rathcoole.

It is believed the siblings died after being sedated and were possibly smothered to death while unconscious.

The children’s father, Andrew McGinley (pictured above with the children), returned home to find his wife Deirdre Morley in a disorientated state outside their house, at about 7.45pm.

He rang the emergency services after finding a suicide note inside the house and finding his children seemingly unconscious in different rooms.

Ms Morley was rushed to Tallaght University Hospital in Dublin where she is getting medical treatment after attempting to take her own life.

The mother, who worked as a nurse, had been on extended sick leave suffering from stress-related illnesses.

A special mass was held yesterday morning at St Finian’s Church in Newcastle as the local community struggled to come to terms with the tragedy.

Parish priest Fr Kevin Doherty said the community’s hearts were broken and that “a darkness” had fallen over the area.

People wept openly throughout the short service as a steady queue formed to sign a book of condolence during the service.

Fr Doherty told mass-goers: “Our hearts that are broken, and a community’s heart that is devastated. It’s good that we are here, that we have come to be together and for those who it is for we pray.

The McGinley children’s bodies were yesterday taken by ambulance to the city morgue in Dublin for a post-mortem examination to determine the cause of death. However, the autopsy reults will not be released for operational reasons.

Gardai are not looking for anyone else in connection with the inquiry but have appealed to anyone with relevant information to come forward. Anyone with information is urged to contact the incident room at Clondalkin Garda Station on 01 666 7600.

MICHAEL WOLSEY: Here’s one thing they must not change