ST CANICE’S Cathedral has announced a new Director of Music.

In 2015 Bart won the organ scholarship to Exeter College, Oxford, with a place to read music. He studied organ with William Whitehead and conducting with Paul Spicer. 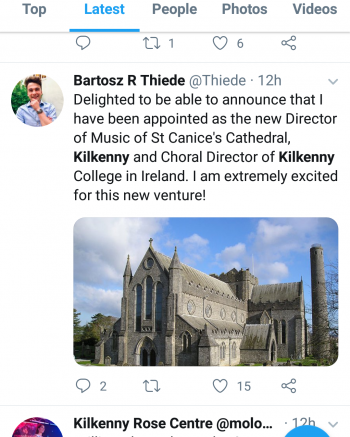 Bartosz has played on BBC Radio 4 Longwave Daily Worship broadcasts, accompanied choirs in St. Paul’s Cathedral London, Tower of London, and has organised tours of Malta and Sicily as well as Vienna, Bratislava, and Budapest.

Bartosz announced his appointment on twitter last night. He said: “Delighted to be able to announce that I have been appointed as the new Director of Music at St Canice’s Cathedral and Choral Director of Kilkenny College. I am extremely delighted for this new adventure.”