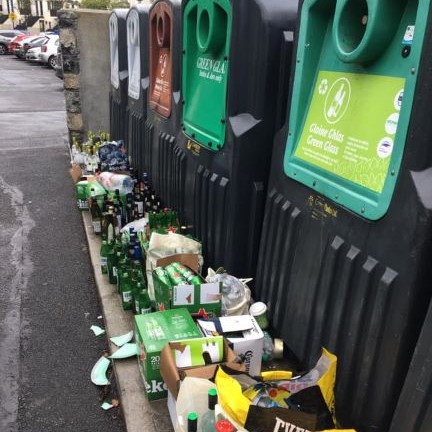 Council workers have been working throughout the morning to clean up rubbish that was illegally dumped in parts of Kilkenny city over the weekend.

This was the scene at St Canice’s Car Park this morning before council staff removed the waste.

Illegal waste was also dumped outside the non-profit Vincent’s Charity Shop at Butt’s Green this morning.

The Chairman of Kilkenny County Council, Cllr Andrew McGuinness also said council workers had shown him a full load of illegally dumped household waste that was found in laneways across the city-centre.

Cllr McGuinness said he has reported the matter to the council and asked for nearby CCTV to be checked in a bid to identify the culprits.

He said it was “disgraceful to see the way this facility is abused”, adding: “It must be stopped.”

Cllr McGuinness said: “Since lockdown there has been a huge increase in the use of the recycling bins and they are full a lot quicker. When they are full it is no excuse to just leave rubbish dumped there for others to pick up.”

The Fianna Fáil councillor has also requested the local authority’s mobile CCTV unit to be placed close to the Vincent’s charity shop in Butt’s Green.

He added: “This is a non profit shop that does fantastic work for the community. The last thing they should be dealing with is illegally dumped rubbish on their doorstep.

“I was at the shop before they opened this morning to see this for myself because it is an ongoing problem for them.
“Luckily, they have found evidence linking the rubbish to its owner and I have advised them to pass it to our litter warden for investigation.”Several pepole took to social media this morning to express their anger at the actions of those responsibile.
One woman commented: “Disgusting, how anyone could do this is beyond me. Shameful.” 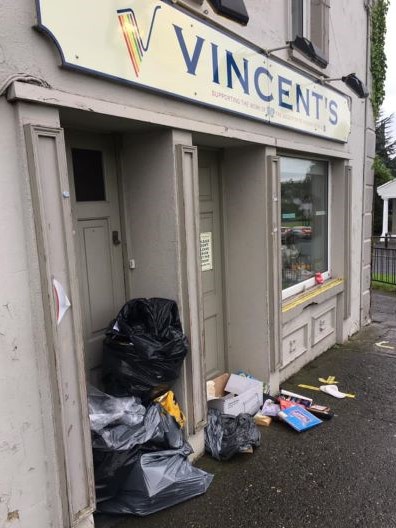