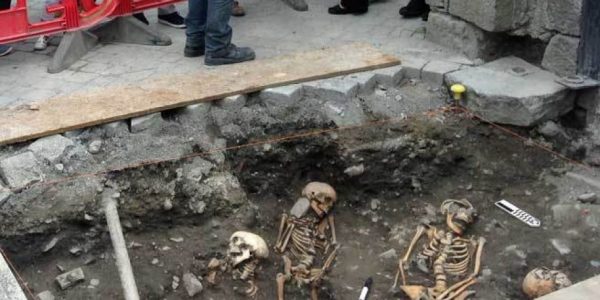 THE bodies of three people discovered during the excavation at Kilkenny’s Medieval Mile Museum three years ago will be given a final resting place in a specially-constructed burial vault.

The skeletal remains of the two women, and a young person between the age of 11 and 14 of so far indeterminate gender, will be buried in a vault that will go on display at the museum next summer.

The remains, believed to be between 400 and 600 years old, were taken away for analysis following their discovery.

The curator of the Medieval Mile Museum, Grace Fegan, said the bodies will be returned to the city by the end of next July.

Grace told KilkennyNow.ie: “A design team is currently working on the shape of the burial structure. They will be placed in such a way that they can be viewed if people want to see them. In some ways they’ll be getting a burial vault that they didn’t get in their lifetime.”

Grace and the team at the Medieval Mile Museum hope they will be able to tell the stories of the three people, the lives they led and their cultural identity, and whether they viewed themselves as Irish, Anglo Irish or Norman.

Scientific analysis has revealed some details about the lives of the three. One was a 45-year-old woman, which would have been a very old age at the time. The second remains are those of a young woman between the age of 17 and 19, while the third body is believed to be that of a child between the age of 11 and 14.

Grace is hopeful they can unravel more rich detail about the lives of the three with the assistance of DNA testing.

The cost of working on the skeletal remains, and the construction of the burial vault, has been high, with the project receiving financial support from Fáilte Ireland and Kilkenny County Council.

However, Grace believes the project will greatly add to the museum and city’s rich history.

She added: “It’s going to be very interesting because we’ll be able to tell people why we know what we know. We’ve got quite a bit of information already, but there’s going to be more in the years to come.”

The Medieval Mile Museum team have also come up with an innovative idea to allow members of the public to interact with the project.

As part of exhibition, they are asking people to tell them about their own cultural identity, what group they identify with, and then incorporate their responses into the exhibition.