Emergency services in Kilkenny have been working non-stop to restore power and re-open roads blocked by fallen trees as the aftermath of the short-lived by extrememly powerful Storm Brendan.

Almost 500 homes around the county remain without electricity this evening as ESB crews battle to restore power.

Some 460 homes in Inistioge, Rosbercon, Graiguenamanangh, Goresbridge, Rosehill and Kells are still waiting to be reconnected. Nationally, up to 50,000 people are still without power. 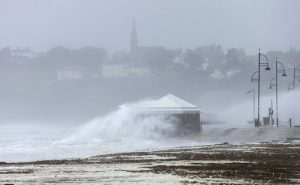 Meanwhile, local council staff have been working all afternoon to remove fallen trees that were uprooted by Storm Brendan.

A tree that fell near the Rock Bar on the Kilkenny–Freshford Road was removed earlier this afternoon. The road has since re-opened.

A tree blocking Old N8 (R639) near Urlingford in both directions has also been removed recently.

AA Roadwatch earlier had to warn motorists of a trampoline on the loose on the M9 between junctions 8 and 9, just outside Kilkenny city. The motorway had to be temporarily closed as crews battled to make the road safe.

The road from Clonmel to Kilkenny was also closed earlier today after a large tree came down on the roundabout outside the county Tipperary town.

Meanwhile, council staff are still dealing with debris from a shed roof which flew into the outside lane of the dual carriageway between Luffany roundabout and the Slieverue roundabout on the N29 at Rathpatrick, south Kilkenny earlier today.