ELECTION 2020 LATEST: ‘I can’t believe it, I never expected it’ – the first votes are in, Kathleen Funchion makes history 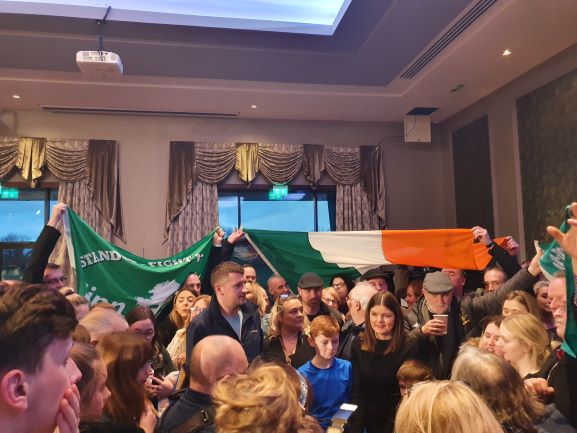 Kathleen Funchion made history this evening after she became the first ever female TD representing the Carlow-Kilkenny constituency to be re-elected to Dáil Eireann.

The Sinn Féin deputy topped the local poll in spectacular fashion after she secured just under 24% of the first preference vote, leaving her Fianna Fáil and Fine Gael rivals trailing in her wake.

“I can’t believe it – I never expected it [vote to be so high], but I’m delighted,” she told KilkennyNow.ie shortly before the first count was confirmed at the Lyrath Estate conference centre.

The Callan mother-of-two – who was tipped by many to lose the seat she won in 2016 – took a staggering 17,494 first preference votes, with all eyes now on who will benefit from her 5,219 transfers.

Speculation was mounting earlier this evening that Adrienne Wallace (Sol-PBP) will hoover up many of Deputy Funchion’s transfers, which is set to have a crucial impact on the battle for the final seat in the constituency.

Traditional local poll topper John McGuinness (10,558) and his Carlow-based Fianna Fáil colleague Jennifer Murnane O’Connor (9,351) are in pole positions to take the second and third seats in the constituency, but they fell short of the 12,274 quota at the first count.

Fianna Fáil’s south Kilkenny-based TD Bobby Aylward recorded 7,750 votes in the first count, followed by Fine Gael’s John Paul Phelan on 6,396. Deputy Phelan is expected to mop up most of the transfers from his running mate Patrick O’Neill, who polled 3,674 first preference votes.

The showdown for the last seat is shaping up to be a real dogfight, most likely between sitting TD’s Aylward, Fine Gael’s Pat Deering, who received 5,929 votes, and the Greens’ Malcolm Noonan on 4,942 – all of whom will be praying for those vital transfers to see them over the line.