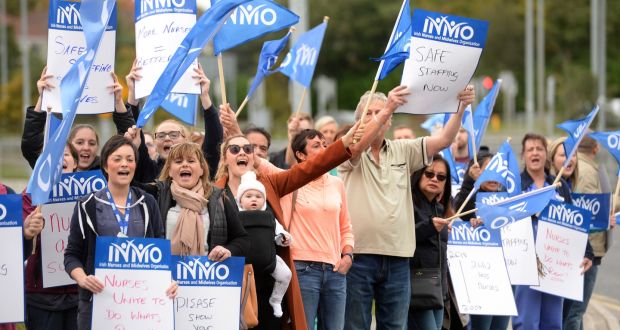 HOPES are growing that Kilkenny patients will be spared another three days without vital hospital services next week.

According to reports last night, “intense efforts” are currently underway in a bid to find a resolution to the nurses’ strike that crippled services at St Luke’s General Hospital for the third 24-hour period of stoppages over the past eight days.

The move comes less than 24 hours after Kilkenny TD Bobby Aylward urged the Government to “meet the nurses halfway” in the dispute over pay and conditions .

Now it has emerged an intervention could potentially be made to get the Irish Nurses and Midwives Organisation (INMO) and the Health Services Executive (HSE) back in talks.

Nurses are demanding a pay increase which the Government has said could cost €300m.

Finance Minister Paschal Donohue yesterday stressed pay could not be part of the talks and he would have to respect the other public servants who were adhering to its conditions.

Around 37,000 nurses took the picket line in Kilkenny and across the country again yesterday, causing widespread chaos in hospitals and in the local community.

It is feared the health service will be plunged into chaos next week as nurses stage three consecutive days of strikes.

This would create a dangerous backlog of patients, several of whom are very ill, who will wait weeks for their appointment to be rescheduled.

Despite the impact on local hospital services, the majority of the Kilkenny public still appear to be firmly behind the nurses’ fight for better pay and conditions.

Last week a senior Government source indicated to KilkennyNow.ie that while small pay increases could be considered, the nurses’ demands could not be fully met because of the knock-on effect it would have on the public sector pay deal with unions from other sectors.