SPONSORED: Love all – why work is a pleasure and privilege for Andrew Castle, the voice of tennis 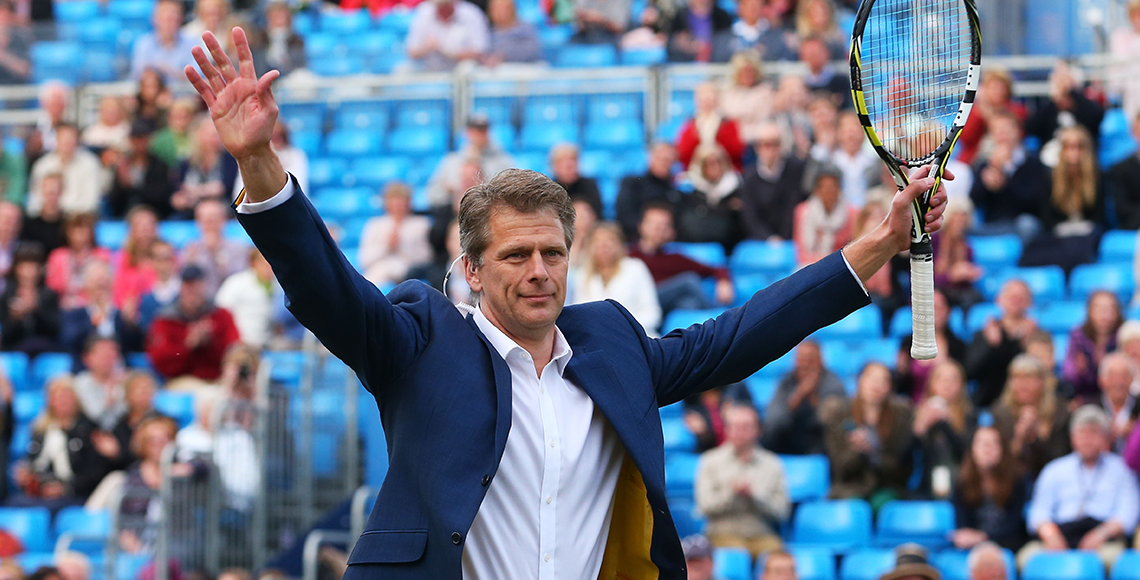 Andrew Castle has a job any sports fan would envy, with a front-row seat at some of the world’s biggest events.

Golf, basketball, showjumping , speedway and even the bruising sport of political interviewing , have come Castle’s  way in his years as a broadcaster with GMTV, Sky Sports and  the BBC.

But his real love is tennis, the sport he excelled at. And now, as the BBC’s lead tennis commentator, Castle is living his dream.

Castle’s history – he was Britain’s No 1 singles seed in the 1980s – made him a natural for the job. But it didn’t fall into his lap.

“I remember being up in Slaley Hall in Northumberland during the first week of Wimbledon,” he says.

“I was covering the golf for Sky Sports. I was sitting there in my room thinking: ‘It’s a bit mad that I’m doing the golf when all this tennis is going on’. I called an old friend who was actually in charge of the Wimbledon broadcast and managed to get on board with that, luckily.

“My first commentary was a Rafael Nadal match out on court 12, and I remember him standing out. It grew from there. Now I get to sit in the Centre Court commentary box with tennis legends watching guys like Nadal and Roger Federer. How lucky is that?”

Some people are a bit surprised when Castle (57) steps outside  his comfort zone. His range runs from the Horse of the Year Show to the Daytona 500 and, as a journalist, he believes he should turn his hand to whatever comes his way.

“I don’t really know what qualifies you to commentate or present on any particular subject other than a vigorous amount of research to do it justice,” he says.

“I remember covering the international Horse of the Year Show from Olympia. I knew nothing about horses until I learned everything there was to learn from the people in the game.”

In 2000, Castle’s career took a radical turn when he accepted a job as host of GMTV. It was very different, but he adapted and rose to the challenge.

The day to day work is different but the basic job is the same, he explains.

“If I’m interviewing a top politician on GMTV, I’m preparing a set of questions that I want to know the answer to. That’s based on journalism.

“People might say: ‘What’s a tennis player doing working on this?’. Well, I have done the work, so now I’ll wear whichever hat somebody wants me to wear.”

Tennis, especially Wimbledon, remains Castle’s first love. He says just walking through the gates of the All England Club raises hairs on the back of his neck.

“I have goosebumps when I arrive, even if  nobody’s around,” he says. ” It’s just one of the great privileges to call it my place of work.”

Roger Federer, Rafael Nadal, Novak Djokovic and Andy Murray are his particular heroes from the men’s game. They have, he believes, produced an era of dominance and brilliance that seems unlikely to be topped.

Castle traces that era back to  2008 when Nadal met Federer in a third consecutive Wimbledon final, and finally beat him.

“That match changed the game,” he says. “The gold standard of tennis improved in one match. They pushed each other to mad limits.

“I remember it was Tim Henman’s first Wimbledon final as a commentator. We both sat there in the commentary box in shock and awe.

“Of course, since then there have been more, mainly featuring Djokovic. He has just quietly won five Wimbledons –  I remember the 2018 semi-final against Nadal, particularly. Another mind-boggling match.

“Nadal with his determination and muscularity is genius, but I have to say I think I’ve seen the best tennis come from Novak’s racquet. He came to the party slightly after the other two, but I think he might have been the most remarkable.”

For Castle, the highpoint of his commentating career came on 7 July 2013 when when Andy Murray beat Djokovic to become the first British man to win the singles title in the Open era.

“Murray had three championship points at 40-0 up in the final game, lost them all, and was back at 40-40,” he recalls.  “The director pushed into Murray’s eyes and what you could see was a man trying with all of his heart and soul, feeling every emotion going.”

A beautiful shot won the match for Murray and Castle had the privilege of delivering the winning line.

“All I had to do was give a little line and back off,” he says. “Throughout that game I kind of knew it was my job to lead viewers through the emotional turmoil. Something like 72 per cent of UK televisions were watching, so that was quite a responsibility. Hopefully we did it justice.”

Castle has unbounded admiration for the way Murray has battled through injury, refusing to give up.
“He’s still doing it, he can still compete. Why would you stop? He’s still thrilled that he’s out there, as am I.”

“Nothing’s ever enough for the great players,” Castle says.

And maybe that goes for the great commentators, too.

“Nothing’s ever enough for the great players,” Castle says.

And maybe that goes for the great commentators, too.

Tonight’s the night! Last chance to bag a ticket for Kilkenny’s OsKars