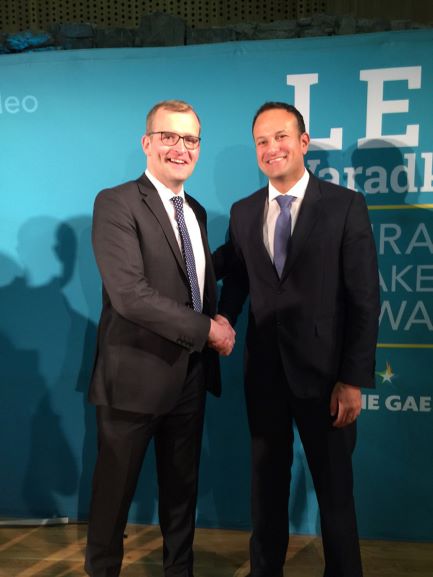 Minister Phelan will wear the green jersey as he represents the Government at the celebrations in Estonia, Latvia and Lithuania.

This year senior and junior ministers have been dispatched to every European capital city for St Patrick’s Day as part of the Government’s response to Brexit.

During his mission to the Baltic states, Mr Phelan, who is Minister of State with responsibility for local government reform and was recently appointed as Fine Gael’s Director of Elections, will promote Ireland as a great place to live, visit, study, work and do business.

Minister Phelan told KilkennyNow.ie: “I will be visiting three countries over three days for a series of official engagements, which will include Enterprise Ireland meetings, cultural events and more.

“The Baltic countries have been very supportive of Ireland in the Brexit negotiations. Also there’s huge personal links now between Ireland and the Baltic’s with so many of their people now resident here and making Ireland their new home.”

Announcing the Government’s St Patrick’s Day programme for 2019, Tánaiste Simon Coveney said: “St Patrick’s Day offers a unique opportunity to promote Ireland around the world, to celebrate our heritage and renew our bonds with the global Irish family.”

In keeping with tradition, the Taoiseach will return to the US to visit President Donald Trump in Washington as his Cabinet and junior ministers are dispatched across EU, Africa and Asia.