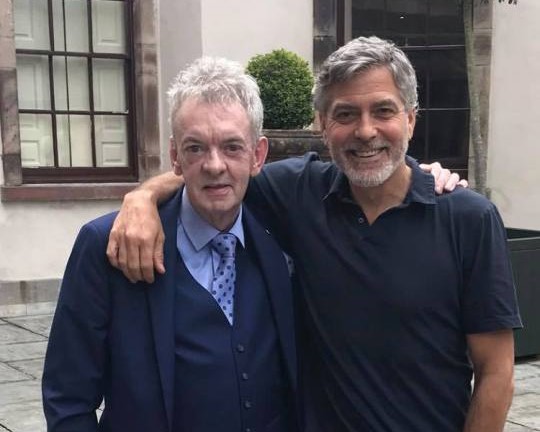 By SARAH SLATER and KILKENNYNOW.IE REPORTER

HOLLYWOOD A-lister George Clooney, whose ancestral family hails from Windgap, spent a few days in Ireland over Easter getting to know his Irish cousins.

The family get-together was organised by George’s parents, the renowned broadcaster Nicholas (85) and his writer wife Nina (80).

The couple hosted the family reunion just over the county border at the award-winning luxury hotel Ballyfin House in Co Laois.

The reunion marked the US actor first visit to Ireland. The 57-year-old Ocean’s Eleven star and his human rights lawyer wife Amal and their two-year-old twins Alexander and Ella arrived in the country last week, before jetting off again on Saturday.

Andy Ring (pictured above with Clooney), who was incorrectly identified as “a cousin” of the star in some media reports, said he was one of the lucky ones to meet with the actor at Ballyfin. Mr Ring described Clooney as “an absolute gentleman”.

He added: “The first thing he said when he arrived at Ballyfin House was, ‘The Irish Clooneys are doing OK’, he’s an absolute gentleman’.”

Mr Ring told KilkennyNow.ie the actor and his family unfortunately didn’t get to make a trip to the ancestral home in Windgap, which will have left some locals who had speculated on social media Clooney was going to visit the parish disappointed.

One had speculated the Hollywood star could be here to “officially open” the local hall. Another suggested Clooney should call to Knocktopher “as I’ve just baked a coffee cake”.

Clooney’s Kilkenny roots were discovered by an American genealogist in 2005, which resulted in his parents’ visiting the country 12 years ago.

George Clooney’s great-great-grandfather, Nicholas Clooney, emigrated to the US from Kilkenny.

George’s relative, Sarah Clooney, who was born in Abbeyleix and died a few years ago, worked in a factory also in the town, which made carpets for the Titanic.

Another cousin, Fiona Clooney, also attended the reunion in Ballyfin. She also visited the Clooney’s family home in Kentucky six years ago with her now husband David.

A film made made six years ago by Kilkenny director Gabriel Murray, titled George Clooney’s Irish Roots, traces the emigration of his Irish ancestor Nicholas from Kilkenny to Kentucky in the US during the Great Famine of 1847.

Aside from his relatives, George Clooney also had dinner with U2 frontman Bono in Dublin on Friday night. He also reportedly met with Taoiseach Leo Varadkar during his stay. 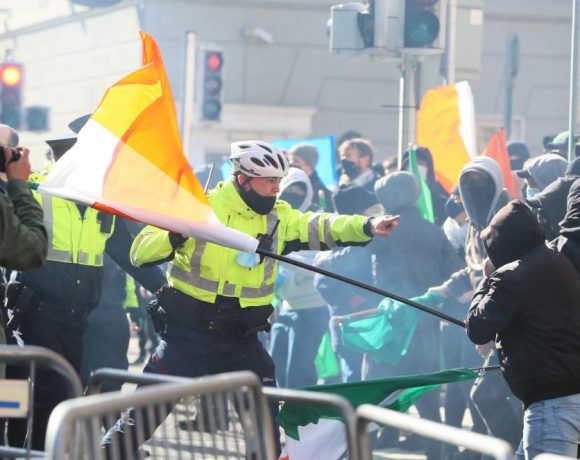